I have worn glasses since the age of 15. I was having problems reading the blackboard (showing my age there). If I remember rightly, that is all I wore them for. As time has gone on I have had to wear them for so much more; to work at the computer, to drive, to watch TV. Really I should have been wearing them whilst out and about as I couldn’t really see people a few yards away very well. I don’t really like wearing glasses; I can never forget I have them on, for some reason they are always wonky on my head (wonky ears perhaps?), I was constantly pulling them out of shape or they were covered in fingers prints. I don’t think I particularly suit them either.  Only over the past couple of years I started to consider having eye laser surgery. Both my husband and sister had laser surgery a good few years back, back then the thought terrified me. I honestly believed if it went wrong you could go blind.

Last year at the end of the financial year I thought perhaps I could treat myself to it, but I somehow managed to put if off. 2017 arrived and I decided this was the year. I organised an initial meeting and found out that my eyes were more than suitable for treatment. If I were to go through with it all I knew I had to pick an optimum time where it wouldn’t interfere too much with my work. I needed a few key gifting occasions out the way; Valentine Day, Mothers Day and Easter. I could then get it done well in advance of Fathers Day which is why the Friday leading up to the first Bank Holiday in May was perfect. I closed all of my online shops the day before the procedure and for a few days after too.

The week leading up to the day was interesting. Everything seemed to be conspiring against me. I developed a pretty bad cold and then 3 days before treatment I woke up with a trapped nerve in my neck. I honestly believed I would be turned away due to one thing or another. (Maybe part of me hoped I may be, who knows). I wasn’t.

I arrived at Optical Express a few minutes before my appointment time and was soon met by a man in scrubs. He talked me through a few bits and pieces, assured me my dodgy neck would be fine and then did a variety of eye tests and measurements. A further 5 minutes past and then I met the surgeon, then I was in the room for surgery.

The thing that scared me the most was the thought that throughout everything your eyes are open and you are awake. My over active imagination envisaged being able to see hands with scalpels slicing my eyes. Obviously this isn’t the case.

The reality is you lie down on a bed, with a special head rest on it and the room is dark. In the room with you are the surgeon and two other people. These two other people in my case were just lovely. Calming, chatty and confident. They made sure I was comfortable and then talked me through what was to happen next. Every single step of the process was explained which when it is happening helps a lot as you know it is meant to be happening. Some anaesthetic eye drops were put in my eyes - they numb your eyes, so even though your eyes are open they feel nothing. This is not a weird sensation at all, you just don’t feel anything.

The treatment I had chosen was Lasik. The first thing that happens is a flap is cut. I had to look ahead of me, there was a ring of lights and I had to look into the black bit in the centre of these lights. To be honest I can’t really recall what happened next but I know that this part of the procedure is cutting the corneal flap. I felt nothing at this point. They do this to both eyes, one at a time, covering one over at a time. This took a matter of seconds and once done I was moved slightly under another machine. I had to look ahead at an orange light for a number of seconds (this is the laser that is correcting your eye). This bit is really insane as at first the orange dot is really bright and in focus but then it is almost like white paint has been poured beside it and then the two are blended together with a sponge. To me it felt like I was watching some sort of science experiment. The whole time this is happening one of the medical staff is counting down the seconds so you know there isn’t long left and to remain very still. I kind of felt like I held my breath the whole time. I don’t think I moved a muscle.

Next the corneal flap is replaced back over the eye. This was possibly the closest bit to feeling a person doing something to me but again I didn’t actually feel anything as it was over in a matter of seconds.

Everyone asked if I was OK and once they were happy that I was happy, the lights came back on and I sat up. I have heard lots of stories about people having black and white vision at first but honestly all I felt with my eyes was that things were a little blurry. I was shown into another room where a lovely man took me through the aftercare of my eyes, the do’s and the don’ts for the next 7 days. No eye make-up, no exercise, no eye touching.  I was also given 3 different types of eye drops; drops to prevent infection,  drops to reduce inflammation and drops to lubricate the eyes whenever they feel dry or blurred.

Next I saw the surgeon again who checked that my corneal flap(s) were correctly back in place and starting to heal. (They begin to heal immediately). Then I was free to go.

mr L picked me up and on the way home in the car the anaesthetic drops were starting to wear off. My eyes were starting to feel a little gritty, teary and my eyelids were becoming heavier and heavier. Once home I went straight to bed and stayed there for about 4 hours. I didn’t manage to sleep but just lay there with my eyes shut. When I got up afterwards the grittiness has started to subside.

5 hours after laser surgery I was ordering pizza and watching TV, without my glasses, for the first time in years. That night I had to wear goggles for bed (you have to do this for the first 7 nights). I had a terrible nights sleep however this was due to my trapped nerve and not my eyes.

The following day I went back into the opticians where they checked the healing of my eyes once more and then my eye-sight. Being able to read the test cards was a revelation. My eye sight is now better than 20:20!!!!!

It is now 6 days from the laser surgery. Visually the whites of my eyes still have red bits on them, this is just bruising from the cutting of the corneal flap and will subside. My eyes feel dry from time to time and yesterday my first day back at work, I struggled a bit with all the computer work. It was almost like all the computer staring was drying out my eyes. I am still reaching for my glasses from time and time and then realising that I no longer need them. I drove for the first time yesterday wearing normal sunglasses, no prescription, that was amazing.

So, so far, so blooming mind blowing. Something that takes 10 minutes can change your life so significantly. I just wished I’d had it done sooner!!!!! 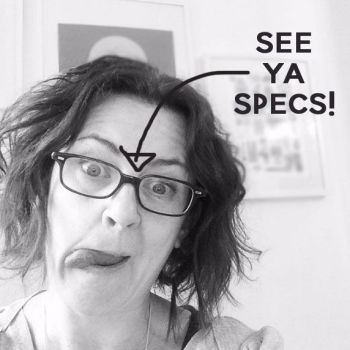